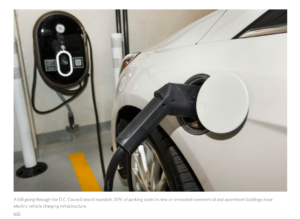 The D.C. Council wants to “future-proof” new commercial and apartment buildings in the District for an electric vehicles.

A bill going through Council would require that at least 20% of parking spots in new or renovated commercial and apartment buildings have the infrastructure to allow for future electric vehicle charging.

The council voted unanimously Tuesday to approve the measure. It still has one final vote from the council and needs Mayor Muriel Bowser and Congress’ approval. The bill was introduced last year by Councilmember Mary Cheh (D-Ward 3) and co-sponsored by seven others.

A Bloomberg report estimates nearly 60% of new car sales will be electric in the next 20 years, though access to charging is among buyers’ top concerns about electric vehicle ownership.

Cheh said the council wants to see the District’s population transition to electric vehicles (and public transit, walking and biking) to help meet its climate goals, but they hope eliminating the concerns about charging would help spur more electric vehicle ownership. D.C. hopes to be a carbon-neutral city by 2050.

The rule would apply to buildings with five or more units that have three or more parking spaces. If approved, it would go into effect in January 2022. It does give some leeway, as the District can grant waivers to owners who say they have severe financial hardship.

Cheh says a building with 100 total parking spots would spend less than $20,000 to comply with the act.

“It makes economic sense for building owners,” she said. “This says, ‘do it now while you’re building and it’ll cost you way less.’”

“And then when the time comes, if you want to put in charging stations, you’ll pay much less. And your tenants who now have these electric cars will be much happier.”

Councilmember Anita Bonds (D-At Large) questioned whether 20% was the right amount. Cheh argued that would be a conservative amount if trend predictions are correct, saying tenants will also likely pressure building owners for that amenity.

“The District is one of the states with the highest percentage of residents living in multi-unit dwellings. According to the 2009 – 2013 census, 58% of its residents are renters, and 62% of its housing units are in multi-unit structures,” Patrick Bean, Global Charging Policy Lead for Tesla wrote last year. “The lack of charging opportunities for these residents will impede their EV adoption.”

“Since buildings are utilized for decades, and even more than a century, it is important to future proof the building with EV capabilities to ensure the District
is ready for more EVs and to satisfy consumer demands more cost-effectively than with retrofits.”

Apartment owners say the cost is prohibitive. The Apartment and Office Building Association of Metropolitan Washington says the bill “has the potential to further compound the skyrocketing costs” of new construction. They argue owners will meet market demand when needed.